People really do win on elizabites. Melissa Yen, previous co-owner of the beloved and sorely missed Vella Cafe is an expert when it comes to guessing my mystery posts. With three correct guesses under her belt, it was time for her guest blog for a second time. Yen is the flavorful mastermind behind 361 Syrups; a line of specialty flavored syrups (used in the Italian sodas at Cippolina, the lattes at Milk & Honey) that’ll be sold this fall at local cafes, bars and stores like Provenance Food and Wine, also writes her own food blog. For her post, she wrote up a mouthwatering taqueria called Carmela’s, where it’s all about the pastor…her post and pics below…

“I don’t know what compels one to pick one hole-in-the-wall taqueria over another. I’ve been driving by Carmela’s Taqueria for years and have always wanted to stop in. Even from the outside it looked enticing. So, finally, I did it. The place is tiny, with a counter and maybe six tables. It’s painted bright, inviting colors and although a bit worn, it’s clean. The menu is simple, with eight taco choices, burritos and tortas. While the horchata was on the watery side, the fresh carrot juice was a steal at $2.50 a glass. I sat at the counter, which is about a foot from the flat top and rotating spit in which the pork for the al pastor tacos is sliced from. Unfortunately the day I was there, the spit was empty, but I got to watch as one of the cooks layered pork marinated in chilies and pineapple with raw onion slices onto the giant skewer which would then be placed on the spit. That layered creation of pork, onions and pineapple must have weighed 100 pounds…no joke. Tacos al pastor are the item to order at Carmela’s. I ordered three tacos, carne asada, chicken, and al pastor. While the chicken and carne asada were fresh, they paled in comparison to the al pastor. It had been shaved from the spit, and then griddled on the flat top so the outside was crunchy and caramelized from the sweet pineapple drippings and the inside was tender and chewy. Oh the flavor! This taco, served with cilantro and onion, did not even need salsa. That is a lot for me to say, as I love to slather on the sauce of any kind. Salsa would have just masked the already perfectly melded flavors of the spicy/sweet pork, the bite of the raw onion and the freshness of the chopped cilantro. I have always been a big carnitas (slow roasted pork) fan, but Carmela’s won me over to al pastor. Carmela’s Taqueria, 1206 W. Lawrence 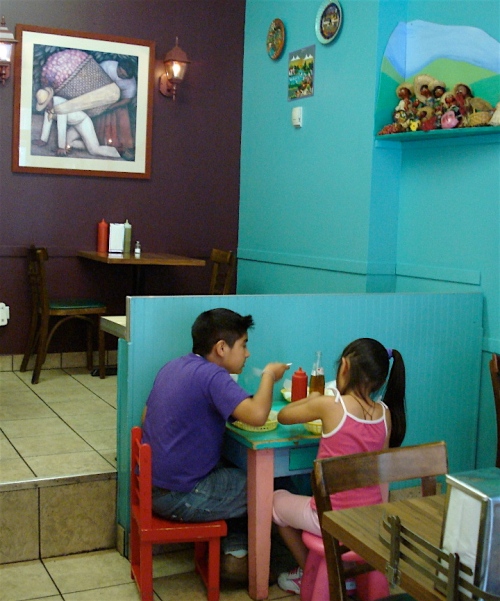