The Straight-Away Café at The Cell

I meant to post this weeks ago, but keep getting sidetracked by mystery posts and guest bloggers. I hadn’t been to a White Sox game in 10 years when I was invited to make the trek down to U.S. Cellular Field mid-September for a game that ultimately ended up being rained out. But, I did get a kelly green “Halfway to St. Patrick’s Day” Sox hat, and chance to try a killer brat from the Straight-Away Café on the first level of the Field (the best in the park, I was informed by my Sox fanatic friend, John MC). The rain poured down long after the game was called off, but we stuck around in it to sneak down to the Straight Away and experience the divine, buttery Hillshire Farms brat resting inside a steamed bun (I get it now!) and covered with a mound of juicy grilled onions. Speaking of onions, I also spotted an onsite onion dispenser, which didn’t photograph as well as I would’ve liked, but was cool nonetheless. With the Sox making the play-offs, I felt this post became timely again, but Northside readers take note: I really don’t favor either Chicago baseball team. In fact, I’m not into baseball at all, but I’m definitely into brats. Anyone know of the best brat at Wrigley? I was only there once this summer, and it was pre-Elizabites.

They may be hidden by juicy grilled onions, but they're in there 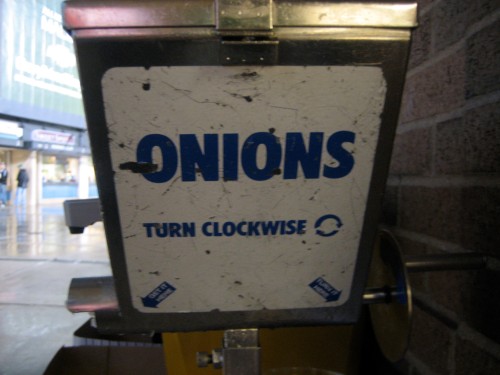 An onion topping dispenser with an old-school crank..genius!