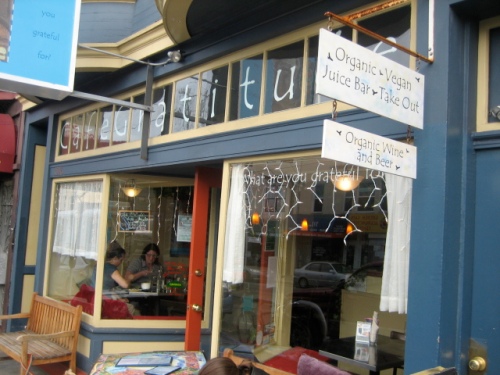 OK. So here goes my last post from my San Fran adventures before it’s back to the Chi. In true West Coast nature, I closed out my trip detoxing at a fabulous raw/vegan food spot we hit up twice in one weekend. From smoothies made with coconut milk, almond butter and raw cacao chips to zucchini noodle lasagna with cashew ricotta and amazingly fresh and spicy guacamole (there was avocado in practically everything..how can you go wrong?) with crunchy flax seed chips, the food at San Francisco-based Café Gratitude is so tasty, it’s hard to believe it was healthy. The service was so-so and ordering is a little annoying as every menu item is a warm and fuzzy self-affirmation like the “I am renewed” organic wheat grass shot or “I am insightful” veggie springrolls, and you feel pressured to say the damn phrase while placing your order. But it’s worth the embarassment for “I am enlightened” enchilada of the day (ours: jicama and apple) with spicy salsa verde, cashew sour cream and Bhutanese red rice, and a surprisingly flavorful “I am cheerful” sun burger made with pumpkin seeds and walnuts and served on sweet onion sunflower bread. Everything at Café Gratitude was fresh and delish, but it didn’t take long to realize, “I am craving meat,” so, it’s back to Chicago where I’ll be reporting later this week on some heartier eats including what might be the antithesis of this place, my highly anticipated jaunt to Hot Doug’s.

One response to “Café Gratitude”