tales of my travels

Some chilly temps and torrential downpours didn’t stop me from savoring every minute in NYC this weekend. It was a rare moment when I was there for pure bachelorette party fun rather than work. I finally got to see Apotheke (and sipped an edamame-purée concoction), was captivated by War Horse on Broadway and the Cindy Sherman exhibit at the MOMA. We ate, of course, and I’ll be posting about our bites all week. One brunch in particular stood out, but not so much because of the food. Perhaps my Norwegian Hollandaise at Schiller’s Liquor Bar was just a miss, but I loved everything else about this place, from the room to the Stumptown coffee, and especially the menu. The font reminded me of my grandfather’s handwriting I’d see on old, yellowed ledgers, and the style of the restaurant name was straight up Milwaukee circa 1950 beer bar/bowling alley…and they have an escarole and artichoke salad on the damn brunch menu! I mean….

I was happy with my Stumptown, and didn’t indulge in wine, but I loved the layout of the wine list…Cheap…Decent…or Good, by the glass, carafe or half carafe…simple and to the point. Schiller’s Liquor Bar, 131 Rivington, East Village, NYC

Frozen mojito at The Hotel at South Beach

Under normal January-in-Chicago circumstances, a luscious photo of an ice-cold, frozen mojito from the pool bar atop The Hotel at South Beach in Miami might have made you all long for summer…but the relatively balmy temps right now aren’t making winter as soul-crushingly horrid as it normally is. Don’t get me wrong, my weekend trip to South Beach and Naples was a welcome respite from Chicago’s ice-encrusted sidewalks, salt-coated cars and dreary skies. I didn’t go too crazy, but did have a mind-blowingly good dinner at Michael’s Genuine Food & Drink (forgot camera-blaaaggghh!) and a fantastic muddled rhubarb cocktail at The Setai courtyard bar (the most stunning bar I have ever seen). But a definite highlight was the frozen mojito served at the pool bar atop our hotel. At first glance around the pool, I thought (wished) it was a green smoothie, but figured that was much too healthy an option for 3PM on a sun-soaked, 80-degree Friday. I was feeling more frozen margarita, but our server convinced me otherwise. I’m not a huge mojito fan, but the mint didn’t overpower, nor did the alcohol, and it didn’t taste like a sugar bomb…just a refreshing mint-kissed mojito, perfect for an unseasonably warm day in Chicago. The Hotel at South Beach, 801 Collins Ave.

I consider myself very lucky to attended undergrad in the greatest place on earth, OK top ten…UW-Madison, WI. I remember coming back for the holidays and forcing my high school friends to hear my tales of the crazy Mifflin Street Block parties, ridiculous Halloween parades on State Street, or just the stories of State Street in general. Even though I was a mere hour away from my family, it seemed like a world away—a perfect mix of city, nature and parties. Two, count ’em TWO lakes, one with a Terrace famous for its chairs and abundance of beer, a gorgeous capital, fun bars and fascinating, great people. I could go on and on about my college experience, but I’ll focus on the one tasty memory recently relived. The aforementioned State Street is the main artery of campus that links the Capital to Library Mall, and a recent stop there on the way home from a Wisconsin road trip had me frowning at the Cosi (formerly Stillwaters for those who frequented that place) and Taco Bell, but overjoyed that Tutto Pasta, Steep and Brew, Espreso Royale and most importantly Himal Chuli were still there. Even back in college I was checking out as many restaurants as I could (the ones I could afford), and this tiny Nepalese restaurant was at the top of my list. Cheap, delicious and satisfying, I remember a $7 special (it’s gone up a bit) of dal and one of the curried meat dishes like chicken sikar simmered in cumin, ginger, garlic and onion, and served with steamed long-grain rice and tarkari; a spiced, fragrant blend of spinach, black-eyed peas, and other vegetables. Hearty, but not heavy, with mild, soul-nourishing (and not scorching) spices, the flavors reminds me of a cross between Indian and African food, and I am officially on the hunt for it in Chicago…anyone? 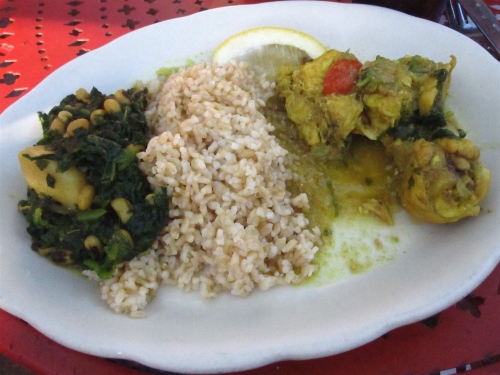 Being a rare visit, I had to stick with what I knew, but I’d happily return to try lamb sikar, a bison meat stew called hyala and rice pudding with flax seeds, orange rinds, coconut and almonds. But if there is anything you road trip it up to try, it’s the dal. The mixed bean soup tastes like a lemon-kissed lentil and white bean, and is almost too pretty to eat. The texture is silky and light rather than hot and brothy or thick and stew-y.

Throw in an order of lightly toasted roti and it’s all worth the road trip indeed. Himal Chuli, 318 S. Street. Cash only, so-so service. Front patio. Worth it.

On the table: Cochon Butcher

A weekend visit to Wisconsin had me exploring one of my new favorite Milwaukee ‘hoods, Bay View (again). I loved stumbling upon tiny Vietnamese restaurant Hué for dinner, and especially dug their sleek cork menus with cool logo’d name plate. The design fit right in with the other impressive eco-efforts at the new spot, including bamboo floors, composting of vegetables and napkins, fryer oil recycled into bio-diesel, locally sourced produce, and recycled glass, plastic, cardboard and aluminum. And with fresh, authentic dishes from shaking beef to pho noodle soup on the menu, it’s worth a day trip. Curious about other Milwaukee haunts to visit? Leave your questions in the comments below. Hué, 2691 S. Kinnickinnic Ave., 414.294.0483

Only in Milwaukee does the brewski flow so freely even the soap is sloshed. I spotted these black rice, vanilla and Japanese beer soaps in a boutique in the Bayview area, a trendy little ‘hood I’m profiling for Where magazine (watch for it!). The Beer Soap Co. is actually a cool little company located nowhere near Lavern & Shirley-land. Looks like it’s down in Miami where they pour the porters, ales, lagers and even witbiers in (not at) the bar. 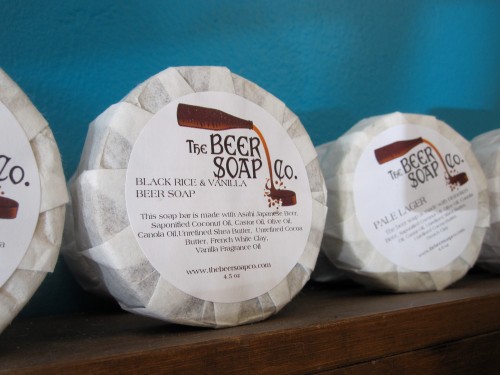 Is there a better soda ad campaign in history than the Coca-Cola polar bear? Ever since I first saw the smiling gentle giants lounging peacefully on a block of ice as it drifted slowly out on a moonlit ocean, clutching their cubs in one hand and an ice-cold bottle of Coke in the other that I decided if I ever drank soda it would be Coke (and the occasional Sierra Mist when hungover). So, naturally, we had to stop into the two-story Coke store smack-dab in the middle of the Vegas strip. There was the usual smattering of Coca-Cola-emblazoned, well, everything, including a soda fountain, and a wall of specially designed bottles (like the bears below). But nothing made our visit more worthwhile than what we spotted in the very back of the store..a little scary, a little cute and a lot fascinating was a 7-foot polar bear at the ready for photos. This wasn’t your run-of-the-mill Goofy at Disneyworld circa 1970s costume, the eyes blinked, the lashes fluttered, the mouth moved, he (she?) was impossibly white..and has a damn (and well-deserved) facebook fan page! It made me fall in love with Coca-Cola and those damn bears all over again. Las Vegas Coca-Cola Store, 3785 S. Las Vegas Blvd. 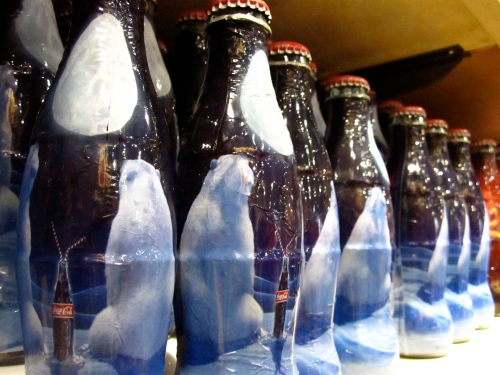 Gummy dice and chips spotted in a Vegas souvenir shop…weird or delicious?

..and so should gummy chips