Not known for: Japanese flatbread at Kaze 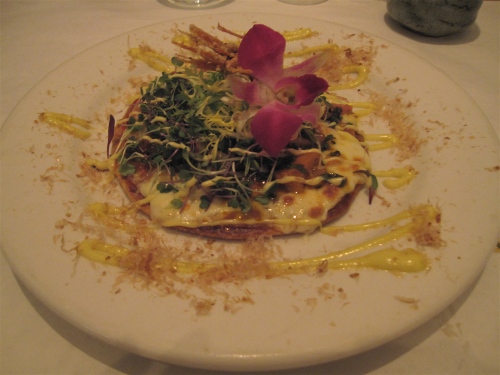 I’ll admit it, when it comes to sushi, I tend to stick to the same go-to spots (Sushi X much?). But I’ll always hold a special place in my heart for Kaze in Roscoe Village. It’s almost a special occasion spot, but not because it’s especially expensive, but because such care goes into everything on executive chef Macku Chan and his crew’s ever-changing menu, from sushi specials like East Coast white tuna topped with banana wasabi purée to white asparagus soup and shrimp tempura and arugula maki. But like any great restaurant, they don’t take off the original favorites, like sizzling sweet potato soup with lobster broth, fish entrées like black cod with bittersweet chocolate sauce, and maki rolls like soft shell crab and salmon. We stuck to these items on a recent visit, but also discovered a few hidden gems and the ultimate not known for. First off, I am a gomae junkie, and I’ve seen the spinach served warm, cold, doused in some sort of rich sesame seed sauce or neatly standing upright in it. At Kaze, it comes topped with crunchy sweet potato sticks and includes deep fried bananas which add yet another textural layer and a bit of sweet. But the biggest surprise came when our waiter convinced us to order the Japanese flatbread, a glorious creation we were told was going to take 30 minutes. We gave it a shot and didn’t know where to start as our server presented a flatbread that smacked of pizza: thin garlic and tomato bread topped with melted mozzarella, fresh figs, sundried tomatoes, tuna and white fish sashimi, microgreens and strawberry mayonnaise with a sprinkling of bonito fish flakes. We didn’t know whether to take a picture of it, eat or fight over it, and we ended up doing all three. It’s a special, so get it before it’s gone. And while you’re trusting me on the insane flavor combos the Kaze crew has the ability to dream up, finish up with the asparagus flan for dessert. Don’t ask, just do. 2032 W. Roscoe, 773.327.4860

Filed under great for date, not known for