Oh, how I miss Vella Cafe. The bright and sunny robin’s egg-blue brunch/lunch spot made a mean Vietnamese iced coffee, frittata, awesome amaranth pancakes and a tasty tofu banh mi sandwich. But the new spot that’s taken its somewhat odd space near the Milwaukee L stop on Western also makes me very happy. At least it did on my first visit there last weekend. I lurrve Urban Belly, and knew that another Bill Kim-approved spot would serve up tasty, well-priced food and Belly Shack certainly does. I heard the place was going to offer Latin American and Pan-Asian sandwiches, not the easiest fusion to envision actually working. But then you see the menu and easily imagine eating all of it. It’s on the small side, but refreshingly well-edited with 5 “sammichs” (like an Asian meatball and rice noodle and mint pita, Korean BBQ kogi and lemongrass chicken with peanut and toasted coconut), sides, soups and of course-soft serve to hit any craving. For sides, we dug into nasal-clearing seasonal kimchi, brussels sprouts and chorizo (they were good but they were no Momofuku brussels sprouts) and a cold somen noodle salad with crunchy tortilla chips and plump olive oil poached shrimp.

I saw blackened tilapia and curry tartar sauce and had to have this open-faced sandwich that comes on soft chewy bread from a local Iraqi bakery. The sweet caramel-glazed fish portion could’ve been larger to match up to the size of hearty bread, but the combo still worked, with a mess of watercress and spicy curry sauce on top. 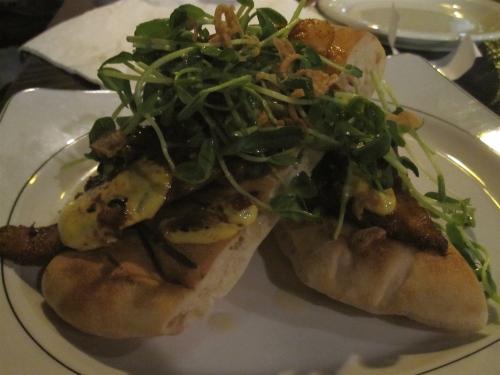 In my future, I can see many many trips to Belly Shack this summer for the soft serve alone as they get bigger machines, and hopefully more flavors! It’s a brilliant offering, one I took advantage of this fall at Momofuku Noodle Bar in NYC. Mint brownie soft serve tasted like the ultimate Shamrock Shake—meaning one with huge fudgy chunks of mint brownies mixed in.

We tried the bacon chocolate chip and the huckleberry lime, but the Vietnamese cinnamon caramel was by far the best flavor of the bunch. 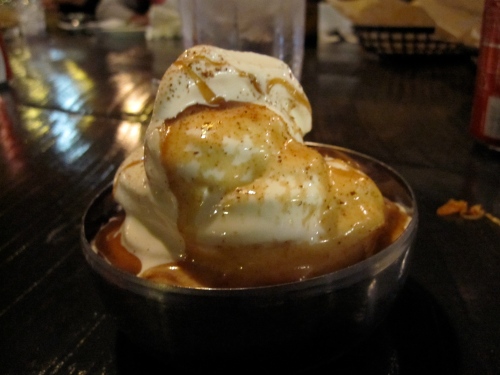 Sweet, spicy, addicting, it was a suggestion from our communal dining partners, who were also kind enough to offer us a sample of the house-brewed beer (a damn jug of it) they had BYOB’d. Their brew was a red ale (unnamed) and tasted to us like a darker, richer Leinenkugal’s Red. (I can’t recall the brewer’s name, but I won’t forget his beer blog name) Finally a communal seating situation that involves table sharing of home-brewed beer! The dark rich ale held up to the parade of flavors on our palate and happily filled us up. And as nice as it would be to hang at a communal table shared by home-brewers at Belly Shack again, I’ll be happy just to try the rest of the menu including the highly-acclaimed tostones with chimichurri sauce, the roasted squash and the belly hot dog with kimchi salsa and egg noodles. Communal beer or not, I’ll be back to belly up. Belly Shack, 1912 N. Western, 773.252.1414

Filed under great for date, I like to eats, new restaurants